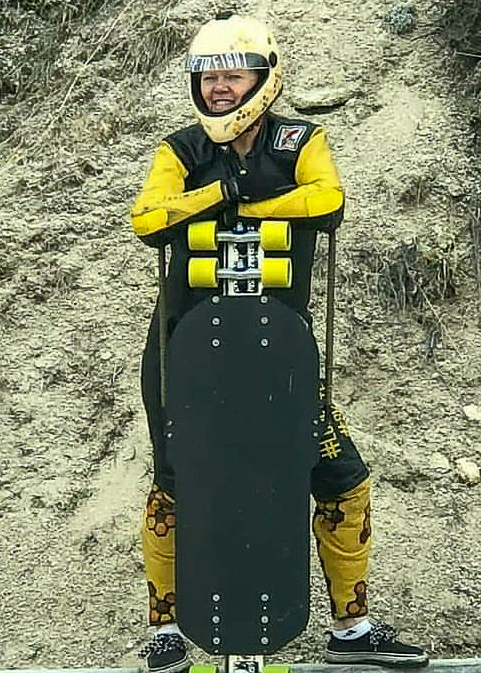 CJ began riding in 2015 after being introduced to luge at the Maryhill Festival of Speed that her 16 year old son was racing in the Juniors division stand-up. It wasn’t long until she had become enamored by the sport and sought opportunities to ride as often as possible. CJ first raced at Showdown at Maryhill Loops in 2016. Her next race was in 2017 at The Maryhill Windwalk where the first women’s street luge division was held and she placed 3rd. She competed again at Maryhill Grand Prix in 2019.

In 2022, CJ decided to pursue earning a spot on Team USA and raced Tepe and Tacos placing 3rd, Maryhill placing 8th, and Last Chance Qualifier placing 2nd, securing her spot on the women’s street luge team.CJ will tell you that one thing that gets her very excited is to work with and ride with young girls on buttboards/luge. She feels like the best way to grow and support her sport is through working with new young riders.

CJ is a Registered Nurse who retired after 39 years last winter. She has 4 grown kids and a Rottweiler named Jett who is a certified therapy dog. She lives on a micro farm where she grows her own vegetables and herbs.  She took up bladesmithing 2 years ago and enjoys both the challenge and the artistic dance with the steel as she makes edged weapons. She is also passionate about self defense and has recently earned her yellow belt in Krav Maga.