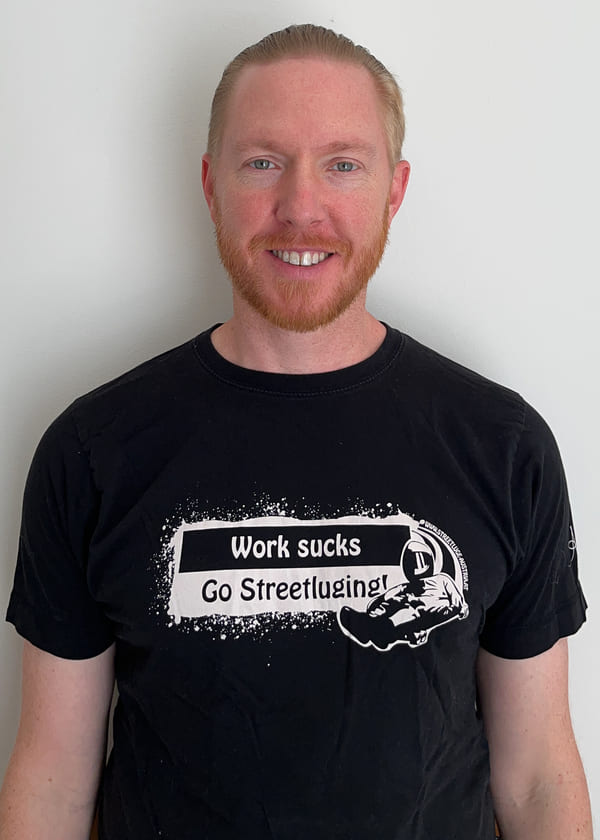 Originally from Mobile, Alabama, Matt Bartlett, now resides in Kennesaw, Ga. As a kid, he was interested in sports, space, and skateboarding. Following his passion for all extreme sports, he saw the X-Games in 1997 and was exposed to Street Luge. Having a natural ability to make things, he found plans on the internet and constructed his first luge, and took it for a ride. He was hooked. He continued to ride his homemade sleds through high school, but he had very little time to follow his passion until later in life.

Established in his career, Matt realized that he now had the means to follow his passion and, ultimately, his dreams. His first race was the Maryhill Festival of Speed in 2012.

With a homemade aluminum sled and Z-roller trucks with Cherry Bomb wheels, he took off down one of the country’s most epic hills. After this event, Matt realized he needed updated equipment which he purchased in the following months.

With updated equipment and a passion for racing, Matt continued racing at the highest level, gaining experience with every event.

In 2014, Matt achieved his first podium in Street Luge at Soldiers of Downhill. Other things to mention would be setting his personal best speed at L’Ultimate Descent in 2016 @154.54kph, first IDF podium in 2018 at Mt. Jefferson, Selected for Team USA for the World Skate Games in Barcelone in 2019, and finally, his first street luge win in 2021 at the ACME Downhill Classic. In total, Matt has competed in over 60 events and organized 7 free-ride/race events.

His most recent race was in Vermont at the Last Chance qualifier, where he finished 2nd in Open Street Luge. Currently, he is USA’s number 1 seed for street luge.